New Wrong-Way Detection System on I-17 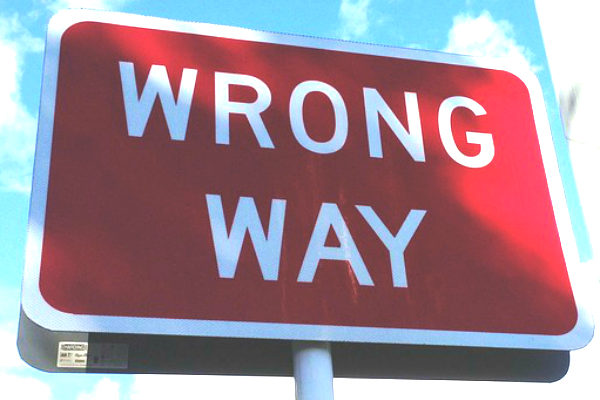 The Arizona Department of Transportation is advancing a $3.7 million project to construct a first-in-the-nation wrong-way driver thermal detection system along a 15-mile stretch of Interstate 17 in Phoenix. The system is designed to detect wrong-way vehicles and alert the other drivers and law enforcement of them on I-17. 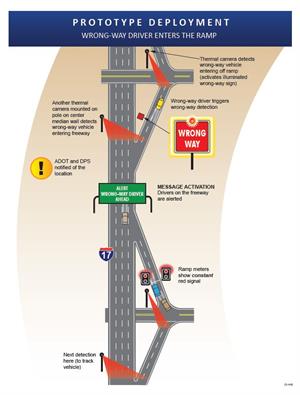 Construction of the thermal camera pilot system is expected to begin in August 2018 on I-17 from Interstate 10 to Loop 101. Full installation will take approximately seven months, and the performance of this pilot will guide further expansion.

The system will take a three-phase approach when a wrong-way vehicle is detected: alerting wrong-way drivers so they can self-correct, warning right-way drivers and notifying law enforcement.

On freeway ramps, wrong-way vehicles will trigger alerts, including illuminated signs with flashing lights, aimed at getting drivers to stop. The system will immediately warn other drivers through overhead message boards as well as law enforcement.

Cameras in the area will automatically turn to face the wrong-way vehicle so traffic operators can better track it. On the freeway, thermal cameras placed at one-mile intervals will signal when a wrong-way vehicle passes so State Troopers plan their response and get out in front of the wrong-way driver, providing a faster response.

Phoenix-area freeways safely move hundreds of thousands of vehicles every day. When crashes do occur, research demonstrates that more than 90 percent of the time, the collision is the result of driver behavior – like speeding, reckless or distracted driving, or driving while impaired. Wrong-way crashes fit this pattern.

Beyond a detection system, coordination with DPS and local law enforcement is necessary to stop and intercept wrong-way drivers before they enter the highway system.

ADOT also continues to study new technologies that promote highway safety for all users, including tools for detection, tracking and notification of wrong-way drivers.

‘Drive Aware Get There’ Safety Campaign

The ‘Drive Aware Get There’ safety campaign was developed to educate drivers on what to do if they encounter a wrong-way driver or an overhead sign warning of one.

The campaign will help motorists minimize the risk of being in a crash with a wrong-way driver. Also, larger and lowered “Wrong Way” and “Do Not Enter” signs have been installed on hundreds of freeway ramps and overpasses statewide.

Arizona highways safely move hundreds of thousands of vehicles every day. When crashes do occur, research shows that more than 90 percent of the time, the collision is the result of driver behavior – actions like speeding, reckless or distracted driving, or driving while impaired. Wrong-way crashes fit this pattern.

These measures can reduce risk, but can’t prevent wrong-way driving. Two out of three wrong-way crashes are caused by impaired drivers and often these drivers have blood-alcohol levels more than twice the legal limit. This public safety issue will not be solved by only engineering and enforcement. We all need to work to keep impaired drivers from getting behind the wheel.