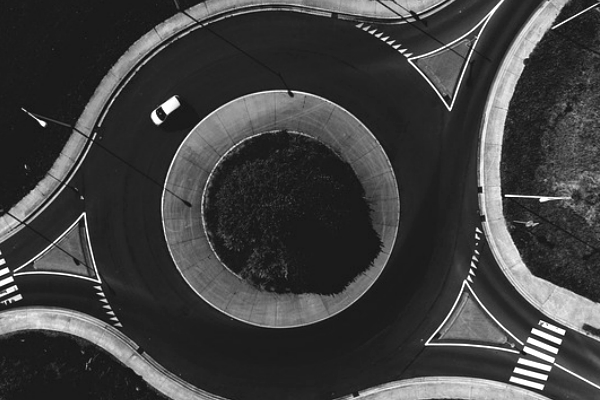 Roundabouts are becoming increasingly used in Arizona instead of intersections. Research has shown that they improve traffic and reduce accidents greatly. They are also fun to drive if you understand how they work! 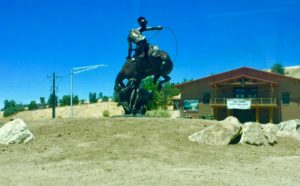 Along the 89 highway that connects Prescott to Chino Valley, there is an ongoing project to add roundabouts, including the newest one in front of the Phippen Museum. The museum had a giant bronze replica of western sculptor and painter George Phippen’s last sculpture before his death in 1966, “Cowboy in a Storm” installed recently in the middle of the circle.

Traffic circles have been part of the transportation system in the United States since 1905, when the Columbus Circle designed by William Phelps Eno opened in New York City. Subsequently, many large circles or rotaries were built in the United States. The prevailing designs enabled high-speed merging and weaving of vehicles. Priority was given to entering vehicles, facilitating high-speed entries. High crash experience and congestion in the circles led to rotaries falling out of favor in America after the mid-1950’s. Internationally, the experience with traffic circles was equally negative, with many countries experiencing circles that locked up as traffic volumes increased.

These changes improved the safety characteristics of the circular intersections by reducing the number and particularly the severity of collisions. Thus, the resultant modern roundabout is significantly different from the older style traffic circle both in how it operates and in how it is designed. The modern roundabout represents a substantial improvement, in terms of operations and safety, when compared with older rotaries and traffic circles

ADOT, the Arizona Department of Transportation, has some useful tips for navigating roundabouts as well as the benefits they bring. “The modern roundabout is a type of raised intersection with no traffic lights. It is designed to reduce crashes and improve traffic flow. By understanding what a modern roundabout is and how it works, motorists, bicyclists and pedestrians can travel through intersections easier and more safely.”

How to Drive Around Roundabouts

As you enter a roundabout, remember two key points:

For multiple-lane usage, follow these guidelines depending on traffic patterns:

According to the Insurance Institute of Highway Safety (IIHS), there are many safety benefits associated with the modern roundabout:

There other benefits to roundabouts, including

Cost of Roundabouts Vs. Signals

The price tag of modern roundabouts versus traditional traffic-control methods can vary. Demographics, geography and environmental elements all make a difference when engineers, communities, and city and state planners begin to consider how to move traffic from one street to another.

Sometimes the financial cost of right-of-way acquisition is higher than the cost of traffic signal construction, and sometimes it is not a factor. For example, though modern roundabouts do not require traffic-light electricity, the maintenance of landscaping or public art can be a cost. However, the reduction in fatal, injury and pedestrian crashes can reduce other costs, including car insurance premiums, health insurance premiums, and physical and emotional trauma. When safety factors go up, the cost to society goes down.

Take time to understand how a roundabout works so you can navigate it easily when driving in Arizona!