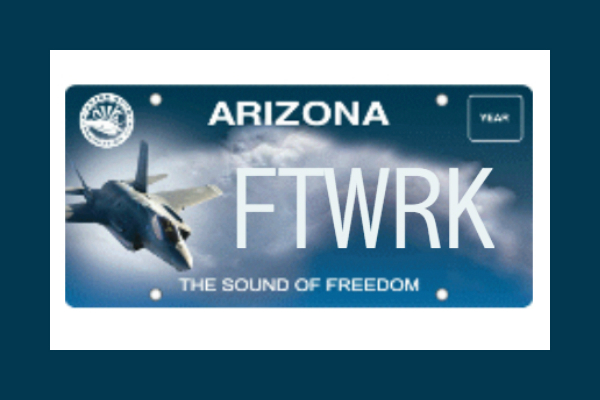 Specialty plates were established by state law in 1989 and legislative approval is required to create a plate. Most people are surprised to learn ADOT’s Motor Vehicle Division doesn’t decide what specialty plates join its offerings. Those decisions are made by your elected state leaders.

The first step is a bill authored by a state lawmaker proposing a specialty plate that in nearly every case supports a nonprofit group. If approved by both houses of the Arizona State Legislature, the bill calling for a specialty plate becomes law once signed by the governor.

Next, the nonprofit pays a $32,000 fee for the production and implementation of the new plate. The state doesn’t cover any of costs of new specialty plates.

Then a mockup is designed and must be approved by law enforcement officials, the nonprofit and the MVD director.

Once all of these steps are completed, the new specialty license plates are made available to drivers through the MVD and Authorized Third Party MVDs.

Specialty plates typically cost $25 annually. Of that, $17 is committed to the organization being supported. In the most recent fiscal year, sales of the plates generated nearly $10 million for charitable causes statewide. 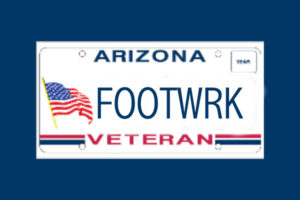 “The veterans’ plates not only honor veterans and their families, but also boost Arizona’s economy,” said Air Force Col. (Ret.) Wanda Wright,Arizona Department of Veterans’ Services Director. “In 2017, the funds from the license plates went to non-profits statewide that support veteran needs and events, which impact our local communities.

The sound of freedom over the West Valley, classic cars and the wonders of science and technology are celebrated in the newest batch of Arizona Department of Transportation Motor Vehicle Division specialty license plates. 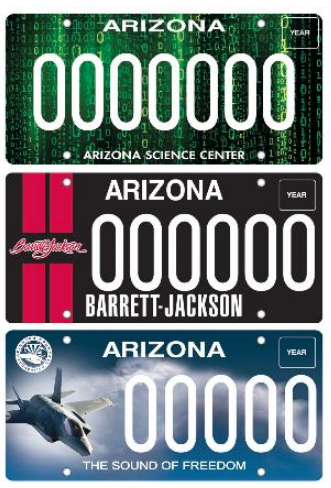 Proceeds from the Luke Air Force Base plate will support Fighter Country Foundation programs and services geared towards morale and well-being, culture, tradition and mission sustainability at the base. Foundation spokesman Ron Sites said, “We are incredibly excited to launch our new specialty plate. These programs support all military members at Luke Air Force Base, to include Air Force Reserve, Navy, Marines and Army Corps of Engineers. We have always used the phrase ‘The Sound of Freedom’ when educating residents what Luke AFB is, and to now actually have that phrase as well as an F-35 on an Arizona license plate is amazing.”

The Science Center plate will help fund science education programs. “The Arizona Science Center specialty license plate is truly a win because it is furthering science learning in Arizona,” said Chevy Humphrey, Hazel A. Hare president and CEO of Arizona Science Center. “The drivers who purchase this plate will get to proudly display their love of science while paying it forward. They will create a fund that directly supports programs and field trips for low-income students.”

In addition to these new releases, two current specialty plates, Route 66 and First Responder, are being made available to motorcycle owners for the first time. 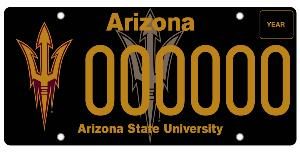 The plate replaces the primarily gold background and a maroon “Sparky” with a black background featuring the ASU pitchfork prominently in the center. This is the third version of the Sun Devil plate, which was first introduced along with specialty plates for Northern Arizona University and the University of Arizona when the program began in 1989. Prior to this newest update, the ASU plate was last re-designed in 2010.

The redesigned ASU license plate has an annual fee of $25 for a non-personalized plate and $50 for a personalized plate, with $17 going to support the university’s scholarship program. Vehicle owners can purchase the new plates at any MVD or Authorized Third Party office location. There are no special requirements to get the license plate. The plate is also available with a disability symbol to those who qualify.The specialty plate program began in 1989, and in the most recent Fiscal Year sales generated nearly $10 million for charitable causes and services in Arizona.

Want to get a Specialty Plate? We have a big selection in our FooteWork offices! Come by and pick one out and if you want to personalize one, we can help with that too!